iNET-PC is the Milwaukee area’s provider for POS systems. iNET is live, local, and proven. We carry the latest EMV hardware and offer customizable POS software options. iNET will install your system, train your employees, and provide free lifetime phone tech support. We’re improving the point of sale world, one restaurant at a time. Experience the iNET Difference today.

POS systems aren’t just a cash register and credit card scanner anymore. Mobile POS integrating Androids or iPads is the norm, EMV-compliant card processing is expected, and older POS software is increasingly vulnerable to hackers. iNET makes it easy for Milwaukee-area small businesses to thrive in the marketplace. Contact iNET-PC today to learn more about our POS systems and capabilities.

iNET leads the pack of Milwaukee POS companies in speed and technology. Our local IT professionals have extensive experience working with small-business computer networks and understand that downtime means lost profit. iNET delivers both small fixes and full POS system builds faster than the competition.

When a Milwaukee nightclub needed two cash registers integrated under their bar, they were told it would take three months. iNET installed their design in three days. When the Milwaukee Brat House needed a complete POS system overhaul, iNET provided it in under a month. While other POS companies seem to take their sweet time to install a POS system, iNET-PC works quickly to find the best solution for your needs and get it up and running.

POS Designed for You

Every iNET POS system begins with a question: how do you make your money? iNET will use that answer to customize the software and hardware we set up to maximize your profit. We train your employees on how to use any technology we install. iNET knows that minimizing the time spent on data entry means better customer service. With iNET's intuitive, easy to use interface, your employees will make fewer order errors and have more time to provide sterling service.

iNET’s hardware and software easily integrate with any pre-existing customer rewards programs and gift cards you offer. With iNET POS, you’ll be able to use the latest developments in the industry without a painful adjustment period for your employees and loyal customers.

No Business Too Small

iNET-PC has configured and installed POS systems for all kinds of small to mid-sized businesses, as well as a few large ones. If you have customers who pay with credit cards, you're a candidate for a POS system. From food truck operators and craft fair vendors to grocery stores and restaurants, iNET has a point of sale system for every type and every size of business.

iNET can create POS systems for: 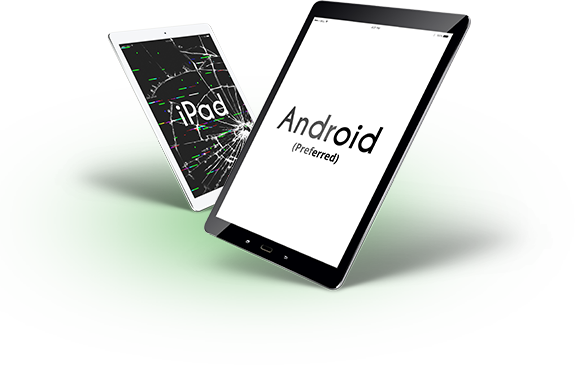 iPad-based POS systems are the first thing most people think of when the subject of tablet point of sale systems comes up. Many local businesses, therefore, are surprised to hear that iNET strongly prefers Android POS systems.

While iPads are great for home use, they just aren’t as “ruggedized” as the Android-based tablets and can’t withstand the drops and spills inevitable in a retail environment. iPads are also considerably more expensive than Android tablets, to the point they’re just not cost-effective for most small businesses. iNET clients who used iPad POS systems often abandoned them within months because the cost of replacing damaged iPads was a drain on profits.

iNET has partnered with Camaleon POS software for all of our new network builds. Camaleon is an industry-leading, flexible software option that can be customized for restaurants, grocery stores, pizzerias, beauty salons, and other types of small businesses.

Whether you’re transitioning from an old school pay-at-the-register setup or looking for a new, more capable POS system, making sense of all the different hardware options and how they work together can be a daunting task. That’s where iNET-PC comes in.

We’ve researched all the POS hardware available and have chosen the equipment we believe offers the best value, reliability and performance for your money. Our favored Android systems, support a full suite of auxiliary hardware, such as cash drawers and receipt printers.

Our 35+ years of experience configuring, installing and troubleshooting POS systems, combined with our on-hand inventory of POS hardware, means we can assemble systems fast. In most cases, we can do in 30 days what most POS system providers tell you they need 6 months to get done.

Even though the trend is toward credit card purchases, you still need a secure cash drawer. With a POS system, your cash drawer is integrated so when you ring up a cash purchase on the touchscreen the drawer opens just as it would with a conventional cash register.

Receipt printers use thermal printing to produce receipts for customers. We carry multiple models for different businesses and environments

Kitchen printers are compact, countertop printers that allow wait staff to send orders from a handheld tablet directly to the kitchen. These printers emit an alert when an order is sent and print loudly so kitchen staff know an order has come through. Unlike receipt printers, kitchen printers use impact printing technology instead of thermal printing technology because the heat and humidity in a busy kitchen would damage thermal paper and cause tickets to smudge into an illegible mess.

The core of a POS system, an all-in-one POS computer is a PC with an integrated touchscreen monitor (typically a 15” display), thermal printer, and ports to support a cash drawer and barcode scanner.

With a fingerprint scanner, you and your employees can forget about remembering pass codes to access your POS system. We use the Digital Persona optical USB fingerprint reader, which captures and encrypts a fingerprint image before sending it to the DigitalPersona FingerJet TM biometric engine for verification.

iNET-PC can equip your POS system with either a stationary barcode scanner or a handheld scanner (wireless or USB connected) – or both, if you need them.

It’s great when you have a line of people waiting to get in your restaurant, but not so great when they get tired of standing in line and leave. Wouldn’t it be great to have a handheld device your staff could use to take guests numbers and text them when a table is ready so they can do something besides stand around and get impatient? That’s what the Pax A920 makes possible.

For pay-at-the-table applications, we favor the Pax Technology A920. The world’s first compact mobile payment terminal tablet, the A920 has a 5” high-definition touch-screen display to facilitate customer facing interactions and a super fast thermal printer hidden underneath. Optional merchant loyalty programs track customers’ purchases and reward them with a discount. A920 mobile payment terminal by Pax Technology, available through iNET-PC

After iNET-PC finishes building or upgrading your POS system, we offer ongoing IT support to keep it running and up to date. Every iNET POS build comes with lifetime free phone tech support. Whenever you have a question, call us at 262-574-9400 to get help within two rings of the phone or less.

If your issue cannot be solved over the phone, iNET’s online remote repair service allows our techs to check your system for software issues and perform repairs via the internet. If the issue is due to failed hardware and not software, iNET can usually perform same-day, onsite repairs at your business.